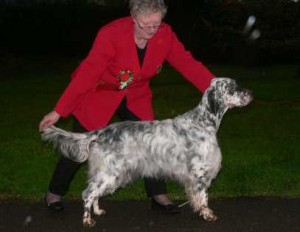 Rhian is Delyth’s daughter by ‘Royal Colours’. She is another showgirl  who enjoys herself in the ring. Only lightly shown – she has been placed  in all her classes. She is very affectionate and craves attention – a real  lapsitter. She loves her ‘fetch’ (a knotted rope dummy) and will go and fetch it in the house and garden – but take her to the field and it ceases  to exist !

Rhian was left at home for the first part of 2007 to mature and grow a coat. When she resumed her career she delighted me with 2 Crufts qualifier placings at the 3 Championship Shows she attended and two Best of Breeds at the two Open Shows attended along with a  shortlisting for Best in Show.

In February 2008, Rhian  produced a delightful litter to Ashley (Sh Ch Richecca Dark and Gold).  From this litter two stunning bitches made their debut – Blodwen (Pewterspeare   Prying Eyes) and Millie (Pewterspeare Peekaboo) – both highly placed in  all their classes to qualify for Crufts in both 2009 and 2010 and Blodwen  delighted us by winning 2nd Post Graduate bitch at Crufts 2010.

Although Rhian herself was entered at Crufts 2010, she stayed at home on maternity leave later producing five bouncing babies to the handsome Upperwood The Showman JW –   Robbie. 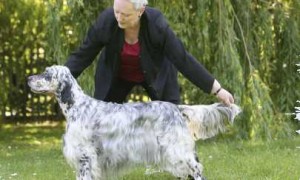 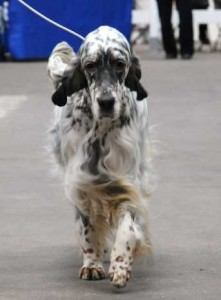