Below is the start of Thalice’s Blog. If
you would like to read more escapades she is currently setting up a blog
at http://thalice.blogspot.com/ 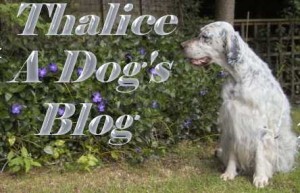 A WEEK IN THE LIFE OF BOURNEHOUSE HAZEL NUT WITH  PEWTERSPEARE.

If Thalice had been my first English Setter, I would never, ever have had another one !What a nightmare, she just never stops finding  new naughty things to do. She see’s it as her role in life to make mine as difficult as possible. Her talents in escapology would put Houdini to shame and she could cause a riot in an empty house. This is catalogue of events surrounding her life in the first week in May 2006. 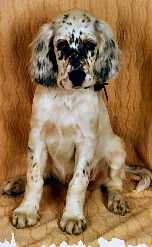 She is now eight and a half years old and last  Saturday evening she was out walking with us and ran away – taking herdaughter Delyth and grand-daughter Rhian with her. She remained missing  long after the other two turned up,leaving Steve and I shouting her name  in vain. She came back when she wanted to wondering what all the fuss was about!

Then there was the coal ….I wondered what the sooty mess was on the living room floor – then I witnessed her whisking past the coal bucket, craftily filching a piece of coal and then crunching her way through it before I could stop her – goodness knows how much she  ate. She had a tummy ache later that night – I wonder why? Then we had  black ‘poo’s’ for two days – thank doG I knew why!!!

Steve and I spent our day off replacing the fence panels in the garden she had previously destroyed and which we had to  shore up on a temporary basis. Then, the minute our backs were turned she was there and I had to do one of my famous flying rugby tackles to grab her tail as she disappeared through a hole she had dug under it. Back to  square one. Later the same day she managed to escape from our woodland garden taking little Rhian with her. This time she only got as far as a neighbours garden and was quite indignant at being bundled back over the fence.

I wonder who it was that liberated the fish fromthe pond ? The one I found the puppy playing with ….

As Thalice regularly raids the kitchen bin, my  solution was to keep it on the worktops and in the olden days not even this would deter her. However, I bought one of those snazzy press-top bins  on Wednesday – a metal one with a really heavy lid with the intention of  leaving it on the floor. I had just gone to bed and heard this almighty  crash coming from the kitchen – rushed downstairs to find her sifting  through the contents of said bin – widely distributed all over the floor.

On Thursday afternoon she snaffled the sandwiches I had prepared for work, just as I went to look for the plastic box to put them in – the one she had pinched earlier in the day. Then on Friday, just as I got in from the shops she dashed into the conservatory to inspect the cat litter tray. As I was removing that to a safer place she raided my  shopping for cakes. Later that same day she managed to escape through the  newly repaired fence until she was eventually persuaded to come home. 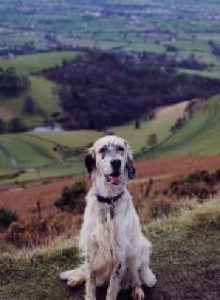 Saturday morning saw another foiled attempt at   disappearing under the fence and another bin raid. Later on whilst I was  at work she succeeded in escaping from the woodland garden by making yet  another hole in the fence – resulting in poor Steve traipsing round the village looking for her – a message on the ansaphone when he returned –  one of the neighbours had detained her – what a monster !

All this in one week – what a nightmare eight and a half years have been..

For instance, when we had Foot and Mouth Disease,   she was in whelp and had given birth to two puppies when she spotted a  pony in the front garden – dashed out-saw it off – much further than she  needed to and then returned to whelp the rest !

When her daughter, Delyth had fortnight old  puppies, Thalice very kindly peeled a large hole in the fence and took all  six adults for a jolly down to the river – Delyth included. I never take  them to the river because it is too dangerous and there are plenty of  lovely safer walks. We had the whole village out looking for them. At  least she brought them back – they were spotted by a neighbour on their  way home! We have had numerous calls from the local Golf Club with  variations on the theme ‘One of your ‘animals’ (guess who) is walking  round the clubhouse kitchen worktops’ or ‘some of your animals are running  riot on the green – come and take them away’. None of this would be possible without Thalice.

My favourite tale to tell is the day that my partner, Steve decided to make himself a sandwich (there is a recurring  theme of bread in this story – her favourite food) and went to the cupboard to find ‘someone’ had already raided it and eaten a whole loaf of  bread. You could tell it was her because you could crack fleas on her  extremely rotund belly! So Steve put her lead on her and walked (waddled?)  her over to the village shop that bake their own very nice and very expensive bread. As they got back in the phone was ringing and Steve  answered it. Taking advantage of his inattention – yes, you’ve guessed madam had chomped her way through that loaf too!

She is a very, very grubby thing, she could get  muddy in a drought – and does ! Taking her for a walk is nerve-racking not only because she is not happy unless she is over the horizon, but she also loves those deep rutted tractor tracks which quickly fill with muddy water. When I eventually catch up with her, its because I find her lying down and lolling round in one of these dirty pools. When these are not available she has discovered that wheelbarrows can be full of muddy water  and these are ideal spots for a snooze, up to her neck in water……then she cant understand why I don’t want her to sit on my knee. She likes to drink with her feet and is happily prepared to retrieve some lost item by  plunging her head to the bottom of a bucket of water. 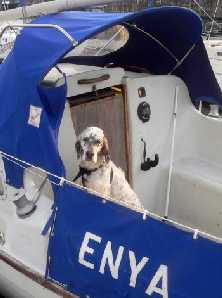 I am at a loss really, to say anything nice about  her – she doesn’t seem to have any redeeming character traits, but I  wouldn’t swap her for the world. Perhaps I should say thank you for the beautiful children she has brought me – fortunately none of them havinherited her unique personality. 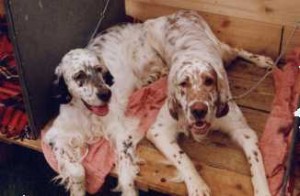 Surprisingly she has been an excellent mother to   her own and surrogate mother to other’s puppies – she does have a rather  tender, caring streak – however she doesn’t consider the nice warm whelping box a suitable spot and insists on carrying the puppies out to a   big hole she has dug under the bushes in the garden. 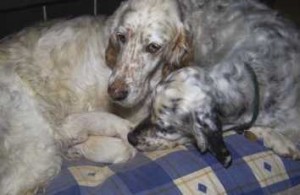 Thalice is a very hormonal and maternal girl and this weeks news has devastated me and will devastate her as well. Although she is obviously ‘cooking on gas’ at the moment, I have, however found some mammary lumps and the vet is keen to do what she calls a ‘full
bi-lateral mammary strip’. That is to remove all the mammary tissue on
both sides of her body. She is to have an x-ray on Monday – to check if
there are any further tumours in her chest cavity. If there are, it is
already too late, but we are hoping she will bounce back with her usual idiosyncratic vivacity. 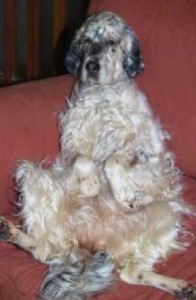