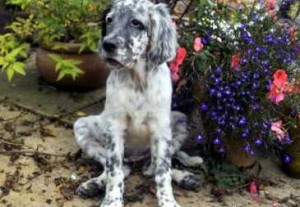 Well I wasnt going to keep a puppy from this litter, but boy am I glad I
did.  Sapphire is Thalice’s daughter by Sh Ch Richecca Heart and Soul and
she has done me proud.  We fell in love with each other when she was 9
weeks old and now we are inseperable.  She has a quiet dignity and is less
boisterous than the others.  She is not particulary keen on showing, but
worked hard for me to gain her Junior Warrant at 16 months.

Now,  Sapphire, unlike her dreadful mother, is absolutely no trouble at
all.  She eats all her dinners, is not fussed by bread, will only escape
if invited to do so (by said mother usually !), comes back when called and
hates getting lost.  Not keen on swimming and certainly not in any SSSI’s
!  She is an absolute delight and so easy to live with.

Her favourite game is play fighting with Rhian and what a noise they make
– bowling round rather like gremlins – no wonder they both end up looking
so grubby and untidy. Still, she scrubs up well…..

In July 2006 Sapphire produced an outstanding litter to Sh Ch Richecca
Dark N Gold and two of these boys – Pewterspeare Pure Genius (Guinness)
and Pewterspeare Pirate Cove (Pugwash) have been selected for showing.
Both qualified for Crufts at their first shows and we look forward to
their continued success. 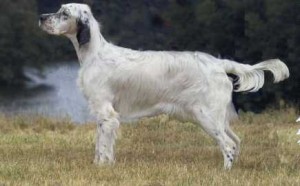 Her name means ‘pretty’ in Welsh and pretty she certainly is. I wanted a puppy who wanted to be shown and for her sire I chose ‘Paper Money’. I saw ‘Skye’ for the first time at my first Championship Show and he took my breath away particularly as he just relished every second in the show ring. The next time I saw him was when he won Best of Breed at Crufts beating the then invincible Sh Ch Bournehouse Razzle Dazzle. Delyth has inherited his showmanship and really flaunts herself in the ring. However, as a four month old puppy she was seriously ill and hospitalised for four weeks during which she did not eat. As a result she never really grew to her full potential, and although she has a very successful puppy career, she lost her coat at around 12 months and is still looking for it ! She did however, manage to gain her stud book number at her first show following her litter. 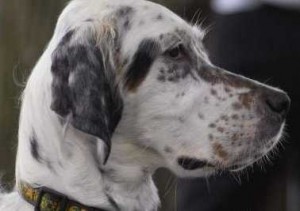 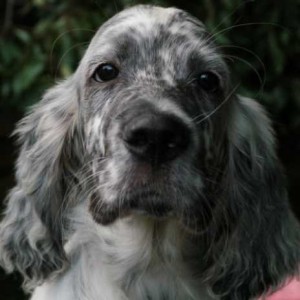 Othello joined us from the outstanding  Robbie X Rhian litter. He is an absolute sweetie with a delightful  English Setter temperament.  He enjoys ringcraft, walks beautifully on a  lead and currently recalls like a professional –  I look forward to showing him later in the year.