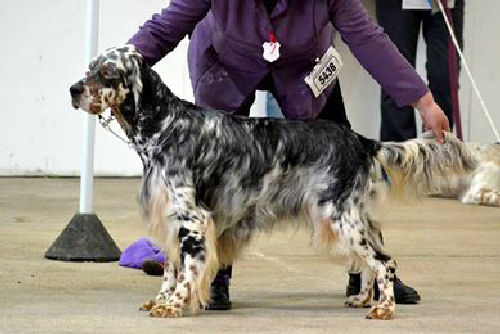 Hook, line and sinker – I was in love  – and had been sold a pup before you could say Jack Robinson

Two planned litters in 2012 failed to materialise in tragic circumstances and since both bitches were soon to be over breeding age I was devastated for both them and myself and I felt that I had lost everything I had been working for 15 years to achieve and there would be no more Pewterspeare. As I spiralled into depression, I started a flirtation with Mr Google and thought I would look at English Setter puppies from Europe on the Internet .There he was !  A beautiful boy living in Poland – I couldn’t take my eyes off his picture.

I thought that I couldn’t possibly manage to go to Poland to get him and shoved the thought to the back of my mind. A few days later I went back and had another look and was surprised to see he was still there and that no-one had snapped him up – so I sat back and had a think.  What did I have to lose if I contacted the kennels ? The chances were he was already spoken for – so what the hell ?     So I emailed them – and yes the lovely Largo was still available. 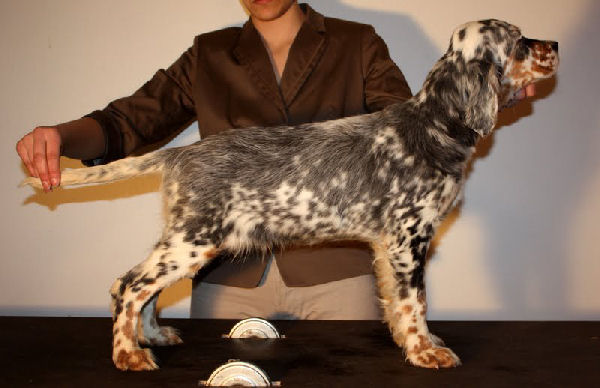 We exchanged emails and phone calls and asked each other questions and sent each other photos and I agreed to purchase Largo providing he could be hearing tested before he left Poland because all my puppies have been tested and I didn’t want him to arrive and then find out that he had problems.  He was tested and had normal hearing, he had all the requirement for a Pet Passport and they agreed to bring him to the Port of Calais where I could collect him.So I set off from North Wales in heavy snow and collected my friend Dilys in Malvern and then headed for Eurotunnel.  We arrived in Calais and hit the shops !!

As the husband who was bringing Largo to me only spoke Polish and French – we exchanged texts (which I don’t do) in French (which I don’t do) and we understood that they were delayed by many hours.  Dilys and I found somewhere nice to eat but it was getting very late and they had to close up.  We drove round looking for somewhere safe and warm to stay but decided the best bet was to return to the port which had a nice staffed waiting area where people with pets congregated.Eventually in the early hours Largo arrived – every bit as beautiful as his picture.

We exchanged contracts and got receipts from the breeder and we both continued our journeys.A stressful time was had by us all on the way back, the weather was closing in with heavy snowfall and I was dog tired.  After a couple of hours sleep at Dilys’s I continued home, skirting the bad weather as I heard news of motorways closing further north.Safely home, Largo has settled in really well and has slotted into our routines just like he has always been here.

Thank you so much to all at Meldor-Sett Kennels : – Renata, Largo’s breeder and daughter Julia who handles their dogs and speaks English so well…..and husband whose name I don’t know, who drove all the way across Europe to deliver my special boy. 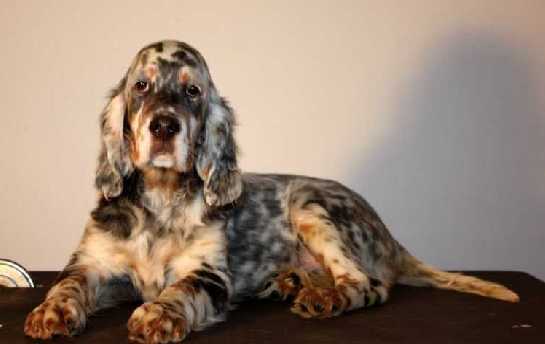 The light of my life has gone  out.  The lovely, beautiful, incorrigable, indefatiguable, crafty,  naughty, clever, gentle and loving bane of my life is no more. Thalice  was 11 years 7 months . How empty life will be without her. 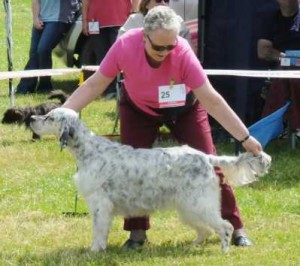 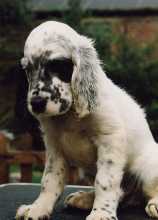 ‘My Boys’ were Poppy’s sons and a sweeter pair you couldn’t wish to
meet. Soft as butter they jostled for attention in the politest possible
way and adored being allowed to sit on my knee. As a puppy, Flash was the
most precocious and had many excellent placings. Fleet took his time to
mature, but when he did he quickly gained his stud book number. Sadly
shortly before Crufts 2005, he developed a malignant tumour on the left
side of his head, and the resulting operation to excise it involved
removing the muscle which operates his ear. 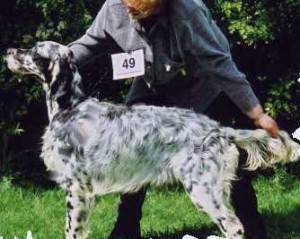 Both ‘Boys’ were blood donors – here is their story:-

Theo is the treasured companion and competitive obedience dog belonging  to a friend of mine. Although Alison has other dogs of her own, and as a police dog handler, her working canine companions, Dobermann, Theo holds a   special place in her heart.

When he was taken seriously ill, she was devastated and in order to  Save his life, Theo needed a blood transfusion. However, vets are unable  to store blood without a licence and the hunt was on to find a donor.  Alison was fortunate enough to have enough doggy friends who rallied round and provided a suitable canine donor – thus Theo’s life was saved.

Apparently the vet didn’t keep a list of possible donors and it was up to the poor dog’s owner at a time of great distress, to try and find a  suitable match. Alison was lucky, but many others might not be so.

My own vet has two surgeries and a hospital providing 24 hour emergency       cover with state of the art facilities so I asked what they would do. They       were not licences to store blood but did have a list of possible donors.       Donors have to be over 30 kilos and in good health, so I offered the       services (unknown to them) of the lovely Fleet and Flash.

Three years and many more trips to the vet later I had a phone call  from them asking if I could bring in one of the boys – they were expecting a poorly dog who would require blood.

My hero was Fleet. He said ‘I’m your man’ and happily popped into the car and we drove to the hospital. The blood was taken from his neck which has to be shaved (so don’t take someone you are showing that week!) – they said they may have to sedate him, but he didn’t notice anything and sat there quite happily during the whole proceedings and was delighted with the offer of sausages as a reward – and still had room for his dinner when  he got home.The poorly dog was successfully treated and returned to his grateful  owner.

You never know when you might be in the position of Theo and his owner,
Alison – it could well be my turn next – however I hope because I have
made a small contribution to someone else, I could at some time in the
future be repaid in kind. 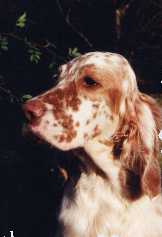 About a year after I wrote this story, I had a phone call from Deirdre  and Derek – good friend of mine who had become so because they owned Pippin who is Fleet and Flash’s litter brother.

Pippin is their ‘raison d’etre’ –he is spoiled without being ruined  and wants for nothing. However, the Saturday saw him off his food, but he perked up for a bit of chicken in the evening. The next day he was under  the weather and fell down the three steps from the kitchen to the living  room. They took him to the vets first thing Monday who could not ascertain what was wrong. H was having great difficulty breathing and a raging  temperature.

They had him booked in with the groomer who had cancelled so they       bathed him themselves. They also ‘Frontlined’ him, but I have not heard of       any adverse reactions to this. His booster had been 9 months previously;   he had not eaten, drunk, been anywhere or done anything different. He is  not overweight or underweight. He doesn’t suffer from any allergies to  food or the environment. He is a big strong boy in the prime of his life.

For something as major as this you would think that there should have       been something momentous to start it off. As their vet was unable to make a diagnosis and could not control his raging temperature, Pippin was transferred to Liverpool Veterinary  Hospital.I offered them Fleet and Flash should they need a blood donor.

Tests at Liverpool revealed a mass in his abdomen, his temperature was
out of control and he was in great pain which they were also having
trouble controlling. His breathing was still bad and they needed to do a
biopsy, but his blood was failing to clot. So Fleet and Flash were invited
to Liverpool to give a unit of blood each, which they did – Fleet quite
happily, but poor Flash got so excited he had to be sedated. 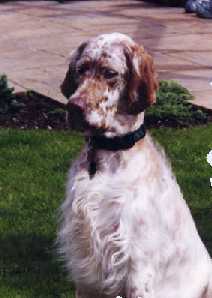 Sadly, Pippin didn’t survive long enough for the blood to be used. There was no diagnosis and we are waiting the results of the Post Mortem.Deirdre and Derek are devastated. Pippin was not quite 7 years old.

The Post Mortem results revealed that Pippin died of an overwhelming       bacterial infection called Klevsiella. We will never know how or where he       contacted it.